The Power of future

With present day environmental and energy concerns rising, the development of environmental friendly energy source is becoming a top priority. The thirst for finding different way of producing efficient peak power using a renewable source is still not over. This project “Renew, Recharge, Relax – The Power of the Future” focusses on generating power from mud, analyzing the way to recharge, for finding the optimal power output and be relaxed about the power of the future. This project leads to discover the secret power of nature – Mud. Nature not only provides shelter but it also comes with a free survival kit, that allows to the take power in it and use it forever.

Microbial fuel cell (MFC) is one promising source of alternative energy that is renewable. MFC converts chemical energy to electrical energy by the catalytic reaction of microorganisms that begins with mud. Soil is packed with bacteria, generating electricity, when placed in a MFC. This is becoming a new technology that can eventually power the world in the near future. This is a potential part of the solution to our current energy demands. The only limitation the Microbial Fuel Cell is facing right now is due to the low power output. In order to improve the power output this project is developed and analyzed to find which type of soil is best suited to increase the power output. The best catalyst to work with the microbes is also identified. In order to meet the existing energy demands, this project identifies the right conditions that could be adopted to attain peak power. The power attained can run forever using a common natural component on the environment. This technique can light-up the rest of the world who are still in dark.

In this project a Microbial fuel cell is constructed using the electrodes (Cathode and Anode).  Two different mud samples are tested (Topsoil and Benthic Soil) to find which soil sample gives the Maximum Power output. The Anode is buried within the mud of each sample, while the Cathode rests on top of the mud. After few days, electricity is made by soil bacteria munching up the sugars and other nutrients in their surrounding environment and release a portion of the energy contained within that food in the form of electricity. The process of electron transfer from the anode to the cathode and the reaction with the oxygen molecule and a proton (a byproduct of electrogenic metabolism) helps to generate electricity. A hacker board is attached to the unit along with the load in it. The load that is used is the LED light bulb. The blinks from the Light bulb are calculated over a period of time and the power is read using a Multimeter. Once the power output stabilizes a catalyst is added to see the power difference that is produced from each mud sample. In this case salt is added to see the difference in power that is produced in each mud sample. This experiment proves that the MFC can be a reliable. 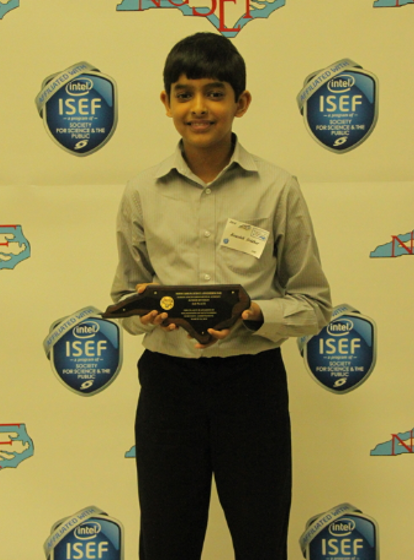